While reading some documentation over at the Mozilla Developer Network (MDN), I found a nice hidden surprise in — guess where? Firebug's Console!

So what was the surprise?

Too curious, eh? See for yourself: 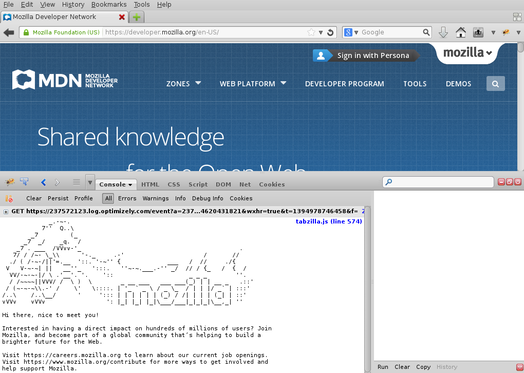 It's a nice ASCII version of the Mozilla mascot, which is accompanied by an invitation to work for Mozilla or contribute to Mozilla. It is loaded through a file named tabzilla.js.

At first I thought that this easter egg was just limited to the MDN website. But after looking at the tabzilla.js code, I found that it works across a number of Mozilla websites, which make use of Tabzilla.

Here's the description of Tabzilla:

Tabzilla is the universal tab displayed on Mozilla websites.

If you focus on the image above — at the top right corner of the web page, the lowercase "mozilla" with the dropdown arrow is Tabzilla.

Sites on which you will find this easter egg

As I mentioned above, this is not limited to the MDN website. It is present on all those Mozilla websites which make use of Tabzilla, and which satisfy the conditions present in tabzilla.js.

Here's the relevant section of tabzilla.js responsible for displaying the above stuff:

The if statement got me curious, as I had never heard of webmaker or allizom. A quick search later, I found that Webmaker is an educational initiative by Mozilla, with a focus on the Web and related technologies.

As for allizom, well, it turned out to be a staging area for Mozilla projects. By the way, try reading allizom in reverse ;)